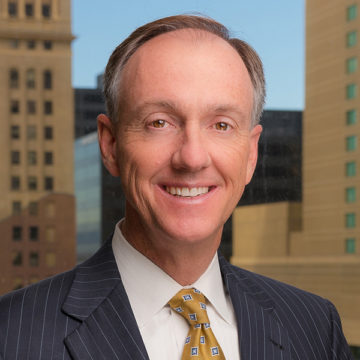 In 33 years of law practice, Paul Yarbrough has handled cases with eclectic subjects—from motorsports to hot air balloons, oil patch mishaps, Gatling guns, motorcycles, dead racehorses, and airplane crashes. His practice primarily focuses on defending the trucking industry. He tries to handle every case with solid advocacy, passion, humility, and without excuses. He believes society needs good lawyers, so we resolve our disputes with justice and without violence. Paul became a lawyer because it has a nobler purpose that demands self-sacrifice for his clients. Paul has tried approximately 50 cases in five states, defending complex pre-litigation and litigated matters throughout Colorado, New Mexico, Wyoming, and other states. Paul is driven by his belief that the practice of law must be done bravely, respecting human dignity, with adherence to natural law and ordered liberty. Guided by his Catholic faith, Paul believes his success comes from genuinely caring about his clients and their cases.

Paul frequently presents on transportation and motorsports topics. He is AV Preeminent rated by Martindale-Hubbell®, has been recognized by The Best Lawyers in America® for Transportation Law since 2007, and was named 2015 “Lawyer of The Year” in New Mexico for Transportation by Best Lawyers. He is a member of the American Board of Trial Advocates, the Trucking Industry Defense Association, the Colorado Bar Foundation, and served as Chairman of the ALFA International Transportation Practice Group. Paul led a large New Mexico law firm, served as Chairman of the New Mexico State Personnel Board, and was a volunteer homeless counselor for Christian Legal Aid. Seven years ago, Paul and his wife of 36 years, Anise, moved to Colorado, where he is now a Member at Hall & Evans, and enjoys practicing with the firm’s excellent lawyers.